How a Bill Becomes a Law 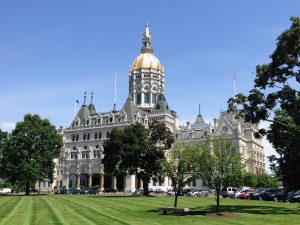 Connecticut’s State Capitol and Legislative Office Building are now partially open due to COVID-19. The legislature is still in recess. Many legislators and staff are still working from home, but they are returning calls and emails. Most committees and taskforces are still holding online meetings. Check the webpage or the Legislative Bulletin for details on attending meetings virtually. We will update this site again as things change.

You're not done yet

To see the legislature and its committees in session, go to CT-N, the legislature’s TV network. CT-N broadcasts are replayed across the state on local cable access channels.

Legislators – who are they?

The importance of legislative staff

How to testify at a public hearing

How to work with a lobbyist

How to track a bill

How to search statutes

Directions to the CT State Capitol and Legislative Office Building