The first time I visited Rita at her home, I had an old address. When I called her from my car, she had her husband drive over and guide me to their new apartment. Rita she is always working on helping someone else with their problems – making and selling dolls for the blind, babysitting her grandchildren so their parents can work, or finding a program for a needy family. She used to volunteer at the local food pantry, but her health doesn’t allow that now. “I used to volunteer at the Salvation Army. Now I buy my clothes there.”

Rita had HUSKY for two and a half years because she was raising her granddaughter. She’s had her granddaughter, who is now seventeen, since birth. Her granddaughter was born early with learning delays, but she graduated with her high school class – Rita beams with pride talking about the graduation. 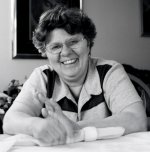 Rita lost HUSKY in the summer of 2003 with thousands of other parents and grandparents. But instead of getting a notice in the mail like most clients, she learned it at the doctor’s office when an insensitive clerk announced it to the entire waiting room. Rita’s back still stiffens with embarrassment when she recalls that visit. “She made me look like a jerk.”

“They said we were ‘over income.’ I wish I knew were all this money is supposed to be.”

Rita has three children and thirteen grandchildren. Their pictures crowd her apartment, along with her doll collection and antiques she inherited from her mother. She’s worked from the age of fourteen – she is now fifty-three. She cut tobacco, baked pastries, made time clocks and waterbed heaters, and worked for Clarabel the Clown. Her husband is disabled after an accident at work that left him in the hospital for months.

Rita used to have a big home, half of a house, for five years. Before that she lived in a very large apartment for twenty-four years. Because of reductions in their income, she now lives in a small, one bedroom apartment in a large complex. She had to give away a lot of nice furniture in the move; some were antiques handed down through her family. She is proud of how clean and neat she keeps her home and her new appliances. She and her husband have $60 each month for food – she is very resourceful in stretching it. Her apartment is dark most of the time to save on utilities. She’s not bitter about her change in fortunes, and she’s quick to say that a lot of people are in worse shape.

Rita has rheumatoid arthritis, heart problems, cataracts, diabetes, osteoporosis, difficulty breathing and dental problems. She is almost constant pain and most days it is difficult to move. Some days her husband has to carry her around the apartment and put her in the bath. “I am so tired. I wake up crying in the night from the pain.” Her husband said, “Rita, you’ve gotta stop moaning. The neighbors are gonna think I’m hurting you.” At one point, she couldn’t move her thumbs for days. She has a cyst on her knee and she gets injections into her knees that work for about twenty days. During the year we talked, she learned that surgery would not help her condition. She has a family history of heart attacks. Her four medications cost her $70 each month but without them, she can’t walk. She has been to the ER and the hospital three times since she lost HUSKY. Free bed funds covered most of the bill, but she still owes $1600. She owes the doctor over $200, so she won’t go back until she can pay down the bill. She notes that the doctor puts “no charge” on her paperwork, but the office staff bills her anyway. She’s known the doctor for years – he cared for her parents as they suffered with Alzheimer’s.

She gets most of her care now through the community health center in Middletown and is very happy with her doctor. She pays a few dollars when she can and “they are OK with that.” For a few months after she lost HUSKY, she was able to access care through the MCAP program. MCAP, the Middletown Community Access Program, is a three year old program that brings together area health care providers to provide a network of affordable health care options for the area’s uninsured. After about 6 months, she was accepted into the state’s SAGA coverage program, which paid the bills. However, a few months later, SAGA moved from fee-for-service to a managed care network that did not include her doctor. Rita was assigned to a clinic in Hartford. Her Middletown clinic and the doctor she’s been seeing there for years are not participating in the program. Rita is considering rejecting SAGA, going back to uninsured, so she can continue to see her doctor. She says she will just have to figure out a way to pay the bills and she’ll worry about the hospital when it happens.

“They talk to us about the ‘spend down’ to get into Medicaid. They can forget it. We don’t have any money to spend down with.”

“The government should give everyone health care. They print the money, don’t they?”