There is almost no wall space in Frances' living room that isn't covered with a picture of her family. She has six children, most living nearby, and eleven grandchildren. She is a very involved grandmother – she raised one granddaughter, Michelle, from the age of six. Michelle just enrolled in college in North Carolina. We were worried - for most of the year I visited with Frances, Michelle was talking about enlisting in the Army when she graduated from high school in June. This weighed heavily on Frances, far more than the fact that she lost HUSKY for herself the summer before. Michelle wanted to "make some good money" to take care of her grandmother who has taken care of her almost her whole life. But stories of soldiers returning from Iraq, as well as Frances' worrying, convinced her to go to college. Frances enjoyed the trip to North Carolina to move Michelle into her dorm, but she misses her dearly. Michelle is doing very well at school. Frances says "she is having a fit with the boys, but she loves it." Frances is thinking of going back to work to fill her days. 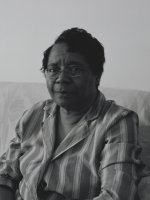 Frances was lucky - she turned sixty-five eleven months after losing HUSKY. She would have lost it anyway within a year as Michelle was turning nineteen. However, she is now eligible for Medicare due to her age. Her income allows Medicaid to pay her monthly Medicare premiums, but she is responsible for hundreds of dollars in coinsurance bills. She has been getting social security payments since her husband died ten years ago. He was a truck driver.

Frances has high blood pressure and high cholesterol, controlled somewhat with medications. She has "poor circulation" which affects her ability to walk. She gets dizzy and sometimes has a tingling in her arms. She has trouble hearing but can't afford a doctor visit to even figure out if a hearing aid could help. But that's OK, she couldn't afford it anyway. She has serious dental problems; a tooth fell out while she was uninsured. She resisted going to a local community health center dental clinic because we were unable to figure out how much the treatment would cost. She still gets medical bills for her care, but she has paid it down to about $100. She is very reluctant to build that debt back up, especially for her own health care needs. She was able to put off her regular physical appointment until she turned sixty-five and Medicare would cover it.

We were able to get her into appointments for dental work at the clinic (the final bill was $79), and for monitoring and medications for her heart and circulatory problems. She was able to get a mammogram as well. She still needs an MRI for her dizziness and a hearing check.

We helped her find out what she was eligible for as soon as she turned sixty-five and got her the paperwork. Even for a group of seasoned advocates, it took hours of research and dozens of phone calls. She asked her state worker for help in filling out the confusing and lengthy forms, but was told to "find the woman who got the forms for you for help." She eventually got them filled out and submitted. The Medicaid paperwork was delayed and she ended up paying $66 out of her Social Security check for her first month of Medicare.

In the year she was uninsured, she often skipped filling prescriptions and reduced her doses to stretch them. It all depended on how much money she had at the time. She didn't see a doctor for a bad cold because she didn't believe she could pay the bill. Her health came behind Michelle's needs, as well as food and rent. She worked at Aetna for seventeen years doing filing and computer input, but was forced to retire early in a round of downsizing ten years ago. Her monthly retirement check is $218. After that she worked at Burlington Coat Factory for three years, but they didn't offer health insurance.

She called Aetna looking for health coverage after she retired and her benefits ran out. But they could only offer her coverage if she had a business.

Frances has a very calm and unassuming manner. She places her fate in God's hands. She was very reluctant to let me take her picture. Out of several rolls of film, she approved of just these two pictures. "I may be ugly on the outside, but I’ve got Jesus on the inside."

She believes Aetna should help out "a little" in getting health coverage, since she worked there for 17 years and that is their business. She doesn't want them to pay the whole thing, but "help out a bit".

"I still don't understand the state system. They want to keep you down. They don't give you a spot to breathe. I'm tired of being down. I do the best I can. I can do what I can do."

She was very determined that Michelle graduate from high school - that was her only goal. At her graduation, "I wanted to shout all across the stage."