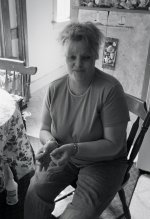 Elizabeth's answering machine message has a traditional greeting in Irish. She taught me how to say several phrases in Irish. She sings in Gaelic and plays four instruments - piano, harpsichord, flute and violin. Her home is one floor of a house her grandfather built in 1896. She remembers playing there as a child. She has lived here since 1978. It is richly decorated in a country style. There are pictures on every wall. The house is full of children and toys. They have a rabbit and a cat. On every visit, Sean or Elizabeth insists that I have a cup of tea - with milk.

Elizabeth is fifty-two and has been a widow for four years. She lost HUSKY in the summer of 2003, along with thousands of other HUSKY parents. Her son, Sean is eleven - an engaging, happy boy who sticks close to his mom and looks out for her needs. Sean was premature by nine weeks and small, 3 lb, 14 oz. It was a tough pregnancy. He has asthma. "A very good boy" as his mother says. Her face brightens when he walks into the room.

Six months after Elizabeth lost HUSKY, she got a letter from the state saying that her income had increased and they were going to move Sean into HUSKY Part B with co-payments for each visit and prescription. She also got a letter from the state saying that said she was being taken off of food stamps, but she never got food stamps. Elizabeth is a substitute history teacher in the New Haven schools - she doesn’t work every day and doesn't work at all for two months of the year. She works per diem and gets no health benefits. The state apparently thought that one pay period, when she did work every day, was her permanent salary. She wishes it was - she'd like to get a full-time teaching job. But she needs more school credits for that and she doesn't have the time or money for more school.

She tried several times to call the state to clear up the mess, but she got no response. She had to get a letter from the City noting that her income was not consistent. It is hard to make calls when she works during the day.

Eventually she sorted it out, with advocacy help, and Sean is back on HUSKY Part A where he belongs, but she is still out of luck.

She later got another letter saying that Sean would lose HUSKY because he didn't choose a health plan in a notice she never got. Again, this took months to sort out. Again, she had to find a way to make calls to the state during the workday.

Elizabeth's older daughter Eliza is pregnant with her second child. Eliza and her baby daughter Jocelyn Marie were living with Elizabeth and Sean all through the year we visited. Eliza emphasizes that the arrangement is only temporary, but she has no practical prospects to get her own place. Eliza and her mother argue often. Elizabeth doesn't approve of Eliza's boyfriend and her life choices, but they care about each other deeply. Elizabeth worries constantly about her daughter, Jocelyn and the baby to come Sean just stays out of the fighting. 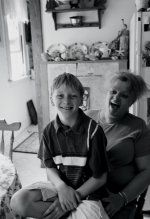 Elizabeth loves teaching history and wants to become certified to get a permanent job but needs 12 more credits. She is considering applying to teach at a private school, where certification isn’t required. "No more settling. I want more than just getting by."

Before she had HUSKY, Elizabeth went to the emergency room once with a heart problem. She ended up with a $1500 bill she is paying in installments. She said that without insurance she won’t go back to the hospital clinic. "I can’t get any more bills. I can't afford it" "If I'm gonna die, I'm gonna die." "I'm barely making it as it is." "God doesn't want me dead yet." "I have to hang around for my kids and grandkids."

She usually delays care and ignores problems because she has no way to pay for the treatment anyway. She has lupus and high blood pressure. She took medications for her blood pressure, but stopped when lost HUSKY because of the cost.

In September Elizabeth had a heart attack and spent four days at Yale-New Haven Hospital. She finally got health coverage under Medicaid because she racked up over $5200 in bills. However, she will only keep that coverage for six months, when she will likely be uninsured again. She gets bills from the hospital, but hasn't paid any yet.

Since she was uninsured when she got out of the hospital, she couldn't get her prescription filled initially. She is now getting her medications and she is back teaching high school. She knows she is at higher risk for more heart problems and is doing all she can to prevent another heart attack - she is dieting and lost twelve pounds, and to reduce stress she dumped her abusive boyfriend of over two years.

Elizabeth's hospitalization easily cost the state $40,000. The cost of continuing Elizabeth's HUSKY coverage, and her blood pressure medications, for the year she was uninsured would have been $3144, a savings of over $35,000, not to mention the health benefits to Elizabeth and her family. The sad part is that she will lose Medicaid, and coverage for her blood pressure medications, again in six months. The chance that she could soon be in the hospital again, or worse, is not remote.

What do you think is needed to solve the problem of the uninsured? Who should be responsible for solving it? "Everyone should get insurance except the rich and the upper-rich, they can afford it." "People who just can't pay shouldn't have to." "If you're struggling to begin with, you shouldn't have to pay." "Everyone should pay what they can." "Children shouldn't go without coverage – ever."

Government spends money on silly things and people who need it are going without health insurance. "People are dying."

Someday she hopes to buy a house. "Somewhere quiet, where you can hear the birds. With an English garden and a waterfall. Peaceful."

"I need some peace in my life."

When I last talked with her, Eliza still hadn't delivered, but is 2 cm dilated and she knows she is going to have a boy this time.