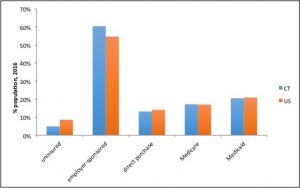 New data from the US Census finds that the number of CT uninsured was down last year to 172,000, a drop of almost half from 2013. The gains are largely due to the Affordable Care Act (ACA) expansions of Medicaid and insurance subsidies. The data also highlight the opposite impact of the recession. While employer-sponsored coverage has been dropping, it fell at three times the rate annually during the recession years of 2008 to 2013 than since the ACA expansion. Medicaid also grew at about the same rate annually during the recession, that cost CT 119,000 jobs, than since the Medicaid expansion. Click here for the brief