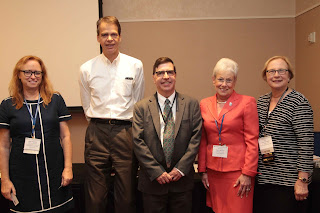 At this week’s CSG-ERC Annual Meeting in CT, state policymakers from across the Northeast got updates from experts on the federal health care landscape, state options to adapt. CT’s Lieutenant Governor Nancy Wyman pulled it all together describing CT’s progress toward health reform. Mitchell Stein gave a detailed summary of federal activity including CHIP reauthorization (ends Sept. 30 without action), tax bills and raising the debt limit which all could impact Medicaid and/or the Affordable Care Act. He re-capped ACA repeal efforts and the status of insurance exchanges including cost-sharing reduction payments, underserved counties, premium levels and degradation of the risk pool. It’s estimated that about half of premium rates for next year are due to uncertainty about ACA implementation. He outlined what is likely to happen this fall and potential state responses including reinsurance waivers and creating a Medicaid buy-in option.
Policymakers then heard from Chris Koller,President of the Milbank Memorial Fund, on the big picture and states’ capacity to address the quickly changing environment. He reminded policymakers about the importance of social services in health outcomes and America’s poor performing health system that costs more and delivers less than other countries. He outlined concerns about slow economic growth’s impact on the health of poorer populations and government’s ability to address that stress, rising health disparities, and political changes. Probably his most popular slide described the results of a Milbank survey of state legislators finding that Democrats and Republicans have very different goals and values for health reform. Republicans are most interested in reducing costs while Democrats prioritize improving health and equity. The federal government is delegating more health policymaking to states, while Medicaid costs rise, crowding out other priorities. In good news, he highlighted Georgia’s progress in reducing infant mortality, and Delaware’s success in addressing chronic illnesses, with lessons learned. He emphasized that states need to get creative in building state health policy capacity and shared a roadmap to get there.
Lieutenant Governor Nancy Wyman ended the meeting by recapping what we heard and describing CT’s long history of success in reforming health care and expanding access. She outlined work creating AccessHealthCT, outreach efforts that cut CT’s uninsured rate in half, Medicaid reforms, and support for primary care and prevention with the state employee plan’s Health Enhancement Program.
This was followed by a lively question and answer discussion touching on the relationship between health care industries and jobs, state options to create a reinsurance program and/or require all individual coverage be sold on the insurance exchange, the role of 1332 waivers, the role of family caregivers, end of life care costs, and comparisons with the Canadian system.
More information on state reinsurance programs and Medicaid buy-in options will be coming.
Posted in Health Reform