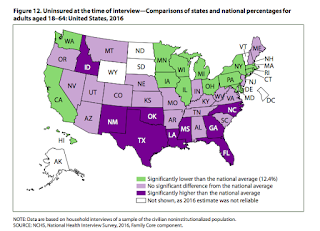 Early estimates of health coverage finds that 3.9% of CT residents were uninsured last year, well below the US average of 9%, according to the CDC’s National Health Interview Survey. CT’s uninsured rate fell by 7.2% between 2013 and 2016, very close to the national 8.0% drop. Last year 41.6% of state residents had public coverage and 62.2% had private insurance. As in past years, states like CT that elected to expand Medicaid and/or develop a state-based insurance exchange under the Affordable Care Act had lower uninsured rates. The survey also found that high deductible health plans are growing nationally from covering 25.3% of Americans under age 65 in 2010 to 39.4% last year.
Posted in uninsured