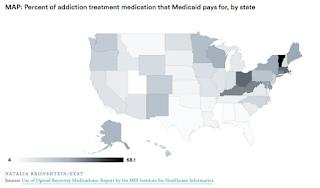 While the opioid epidemic impacts all income levels, Medicaid is the largest source of behavioral health care and opioid addiction treatment. However that rate varies considerably by state, according to an analysis by STAT News. Connecticut Medicaid pays for 44.3% of opioid agonist (buprenorphine) prescriptions compared to the national average of 24.2%. Connecticut is just below the national average in opioid prescription use per population (611 per 1,000 residents vs. US average of 695) but well above the national average in the rate of opioid treatments compared to opiid prescriptions (CT 9.7 treatment Rx per 100 opioid Rx, vs. 5.6 national average). Proposed changes to Medicaid in Congress could reduce Medicaid’s ability to address the epidemic by reducing the number of people covered, and eliminating the requirement to cover mental health and substance abuse treatment.
Posted in healthcare costs, Medicaid