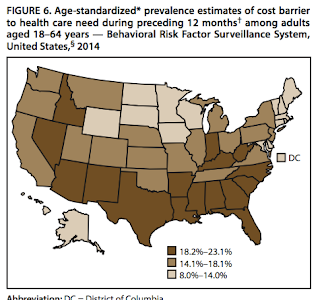 A new report from the CDC provides the first analysis of the population-based impact of the Affordable Care Act. The analysis used data from the 2014 Behavioral Risk Factor Surveillance System, a state-based ongoing survey of adult Americans about health risk behaviors, chronic conditions, health care access and use of preventive care. As for previous studies, this study found that challenges to accessing care are highest for adults with less than a high school education, are unmarried, unemployed, racial/ethnic minorities and people living in poverty. Adjusting for age differences, the study found a sizeable difference between states that chose to expand Medicaid and those that did not for health coverage (85.3% vs. 79.1%, respectively), having a usual source of care (73.8% vs. 69.7%), and experiencing a cost barrier to receiving needed care (15.3% vs. 18.5%). Interestingly there was almost no difference in the age-adjusted rate of having had a routine check up in the last year (65.0% vs. 64.9%). The report also compares rates of preventive care, cancer screenings and specific cost barriers by income level, region of the country, and type of coverage. For example, 27.8% of uninsured American adults reported that they had to pay off medical bills over time in 2014 while only 21.9% of people with public coverage and 22.1% of privately insured Americans faced that barrier. About half as many uninsured American adults received flu vaccines in 2014 (18.0%) than those with public (37.4%) or private (36.7%) coverage. Connecticut compares well in most categories with the rest of the nation.
Posted in Health Reform, Medicaid, public health