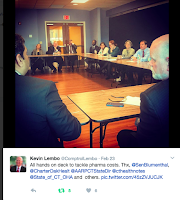 Thursday Senator Blumenthal met with over a CT dozen health leaders at Charter Oak Health Center in Hartford to learn more about the drivers of rising drug costs, the impact on the health of state residents, the burden on public and private sector budgets across the state, and what can be done. He heard that Hartford Hospital’s budget for just 12 generic medications is up $2 million over the last three years. New Haven’s emergency medical services are now spending half their pharmacy budget on opioid-overdose medications, and another 40% on epinephrine. We heard that patients with multiple sclerosis needing costly new medications are being refused entry to institutions because bundled payments do not adequately cover these extreme costs. We heard from a mother who now spends over $6,000 on epi-pens each year to protect her family. Rising drug prices are crowding out other critical spending, in health care and beyond. Concerns were raised about federal ACA repeal and Medicaid block granting proposals, and the impact on access to lifesaving medications in addition to the rest of our state’s health care needs. Senator Blumenthal noted that the federal government is at an “enormous point of opportunity and obligation to do something.” In addition to bills he is co-sponsoring on Medicare negotiating drug prices, drug importation from Canada and other countries with similar regulations to the US, and banning pay-for-delay legal tactics to inhibit generic competition, he asked for more ideas. He heard about ensuring any ACA repeal preserves the elimination of Medicare’s donut hole, removing barriers to generic entry to market, and federal march-in rights “to address concerns about the commercialization of technology developed with public funds”, among other ideas. He heard about state effortsto control costs, but clearly heard that the federal government needs to join those efforts to be successful. We talked about next steps to bring effective relief to consumers, payers and providers facing extremely squeezed resources.
Posted in drugs