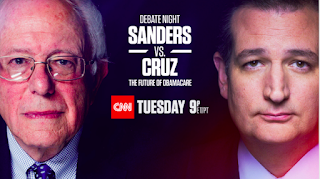 We don’t usually highlight federal actions on this blog, but this event promises to be very interesting. Tonight at 9pm CNN is hosting a debate between Sen. Bernie Sanders (VT) and Sen. Ted Cruz (TX) on the Future of Obamacare. Senator Sanders has been an outspoken critic of President Trump’s plans to repeal the Affordable Care Act, while Sen. Cruz supports the President’s plan. The Senators will field questions from around the US during the 90-minute Town Hall-style debate.
Posted in Uncategorized