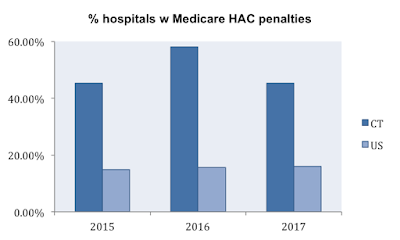 Next year fourteen of Connecticut’s 31 hospitals will be penalized by Medicare for poor rates of potentially avoidable complications, according to an analysis by Kaiser Health News. While this is down from eighteen this year, it is almost three times higher than the US average. Seven Connecticut hospitals have been penalized under this program every year since the program began in 2014, a much higher rate than other states. The penalties are based on the rate of patients with conditions such as blood clots, falls or bed sores, and for the first time since beginning the quality program three years ago, Medicare included antibiotic-resistant infections in the calculations. The CDC estimates that 23,000 Americans die each year of antibiotic resistant bacterial infections they got in a hospital. Penalized hospitals will lose 1% of all Medicare payments for the year that began in October. A recent study found that a similar Medicare quality improvement program – the Hospital Readmission Reduction Program – improved performance in all but one state, especially among the lowest performing hospitals. Under the program, Medicare readmissions dropped 7.7% in CT from 2010 to 2015.
Posted in providers, quality