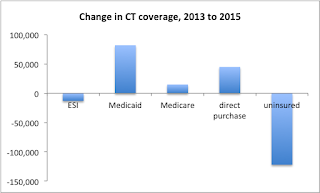 New Census health coverage numbers finds that CT’s uninsured rate went down to 6% last year, a significant drop from 9.4% two years ago before ACA implementation. That rate puts CT ahead of the entire US at 9.4% and ahead of our neighbor NY at 7.1%; we are well above MA’s uninsured rate at 2.8% and slightly above RI at 5.7%. While 211,000 CT residents remained uninsured last year, 122,000 gained coverage since 2013.  The majority of coverage growth was to Medicaid, which gained 82,000 net members, followed by people directly purchasing coverage, including through AccessHealthCT, which was up 45,000 net. The slow decline in employer-sponsored coverage that began many years ago continued with a drop of 13,000 people over the two years.
Posted in uninsured