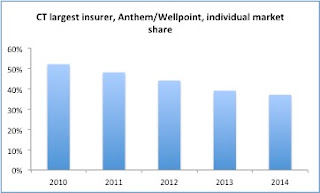 Recent news about insurers leaving AccessHealthCT, CT’s health insurance exchange, have raised concerns about lowering competition and rising prices for health insurance. CT is not alone. Prior to 2014 health insurance markets in most states were highly concentrated, according to the US General Accounting Office. However, the largest individual coverage insurer in CT, Anthem/Wellpoint, has lost market share every year from 52% of the state’s total individual market in 2010 to 37% in 2014, the first year of ACA implementation. It was hoped that the Affordable Care Act’s  insurance exchanges would reverse that trend expand options for consumers through expanding competition. A new GAO reportfinds small decreases in competition for most states in 2014 for small or large group market competition, but individual coverage markets in most states continued the trend toward less competition. Connecticut lost two small insurers from the individual m

arket from 2013 to 2014. The GAO report authors note that many exchanges were new in 2014; subsequent years’ experience will be important to assess the impact of the ACA.