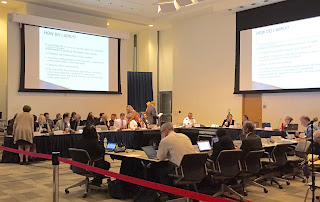 Last week, the FDA’s Antimicrobial Advisory Committee drilled deep into evidence on the safety and effectiveness of Bezlotoxumab, a drug intended to reduce recurrence of C. difficle infections. The evidence was extensive – slides with data tables and charts numbered at least 1,855. Half a million Americans suffered from serious C. diff infections and 29,000 of them died in 2011. Many patients, even after cured of a C. diff infection have a recurrence (20 to 35%) and those patients are at 33% higher risk of dying. Preventing C. diff recurrence is a top public health priority. Bezlo is a new biologic drug intended to reduce the chance of recurrence when given with antibiotics to cure the initial infection. However the FDA and committee members voiced serious concerns over whether Bezlo could interfere with the initial “cure”, which was unexpected, conflicting evidence between studies of whether there was any improvement in recurrence rates with Bezlo, and troubling rates of serious adverse events. It is important to note that C. diff infections are more common in elderly, already fragile patients. We heard about different definitions of the initial “cure” between the FDA and Merck, debated why there weren’t fewer deaths in the Bezlo-treated group over controls, and whether Bezlo could be administered after the initial antibiotic has already worked to avoid any inference with the cure. While members generally agreed on the concerns, we split on whether there was “substantial” evidence of Bezlo’s safety and effectiveness. This was the first time I’ve voted against a drug’s approval. C. diff recurrence is a serious and deadly problem, this approach offers great potential, and there was a great deal of support for the company working on a solution, however many members felt the evidence wasn’t there yet. The FDA makes the final decision.
Posted in drugs