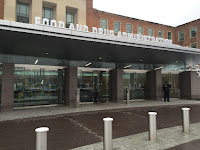 Today’s FDA meeting to vote on what subtypes next year’s flu vaccine will include was fascinating. As more than one participant said, our heads hurt by 10am. There is a lot of work by people all over the globe that goes into figuring out what nature has planned nine months from now. (An important example of international cooperation that benefits us all.) Really smart scientists make very educated guesses based on what is circulating in the Southern Hemisphere right now, evidence about how the virus will “drift” over the next year, and which subtypes are the most deadly. In the end, we followed the WHO guidelines from last month. Luckily for people, this year’s flu season has been unusually light, in contrast to the year before. Despite substantial variation in viral strains between countries, we agreed with the best guess of really smart people at WHO. Like a lot of health policy, they have to plan next year before this year’s data is complete – build a plan while flying it. Thankfully we have pilots who’ve been doing this for many years. Hopefully next winter’s season will be like this winter, and not the year before.