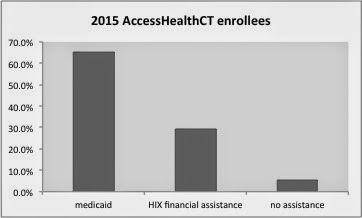 Two thirds of CT residents who secured coverage through AccessHealthCT’s portal this year were eligible for Medicaid, according to the latest federal enrollment report. Another 29% were eligible for financial assistance to buy coverage from a private insurer, and just under 6% bought coverage without subsidies. Of the 109,839 people who selected health plans on the exchange this year, 38% were new enrollees and 41% were automatically enrolled. Concerns about the relative age of exchange members remain from last year with the highest proportion of members ages 55 to 64 years. Experts are concerned that a lack of younger, healthier members may increase the costs of coverage for everyone in the exchange, making it less affordable, and even less attractive to healthy consumers — creating a counterproductive cycle of higher and higher premiums.