This month, Connecticut Medicaid announced the first year performance of PCMH Plus[1], their controversial new shared savings program[2] compared to the prior year. Under shared savings, if health systems (ACOs) are able to lower the cost of their members’ care, they receive a bonus equal to half those savings. PCMH Plus was also designed to reward quality improvement, even if it’s not accompanied by savings. From its inception in January 2017, independent advocates have been concerned that the shared savings payment model creates incentives to deny appropriate care (underservice) and to shift less lucrative, difficult members out of the program (cherry picking), as has happened in other states and with managed care organizations in Connecticut’s past with similar incentives.

PCMH Plus’s first year report provides little evidence that the program had any impact on quality improvement or savings despite at least $1.3 million in net costs to the state. Every ACO, regardless of savings or quality performance, was rewarded with a payment. There does not appear to be a link between payments to ACOs and quality; the highest and lowest quality performing ACOs received the same size payment per member-months (pmpm).

The report included the total cost of healthcare for members, utilization of services, and the quality of care in the nine PCMH Plus ACOs, compared to a matched comparison group of Medicaid members who get care from patient-centered medical homes not participating in PCMH Plus. The groups were compared on savings, quality and utilization of services for both the first year of PCMH Plus (2017) and the year before the program began (2016).

Little evidence of PCMH Plus savings, payments not linked to quality

Savings attributed to PCMH Plus totaled $433,000 but savings payments to the ACOs totaled $1,735,498 resulting in a net loss to the state of over $1.3 million[3]. Four of the nine ACOs saved money but all received savings payments. The program was designed to reward quality improvement, even without savings. Consequently, the five ACOs that did not save on the care of their members also received payments. In addition to these payments, the ACOs received $4.7 million through Medicaid and more from the State Innovation Model (SIM) grant in additional payments to participate in the program.

Since January 2012, when Connecticut Medicaid shifted from a capitated, insurer-based payment model to one focused on care coordination and quality, per person costs in the program have fallen. Connecticut is now a national leader in Medicaid cost control. That trend continued through 2016 and 2017. Total costs of care of both the comparison group and ACO members, in aggregate, were lower in 2017 than 2016. 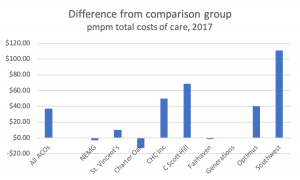 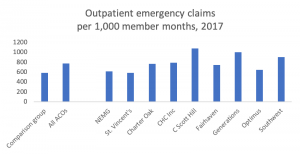 There are signals of underservice in the report that warrant investigation. Underservice, the denial of necessary care, is a serious but anticipated risk in shared savings programs. Both dental and durable medical equipment utilization fell for ACO members far more than for the comparison group in the report. Neither category should be falling. Inpatient care, already higher for ACO members before the program, dropped less than for the comparison group. Also troubling, outpatient care dropped for both ACO and comparison group members. 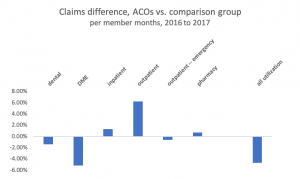